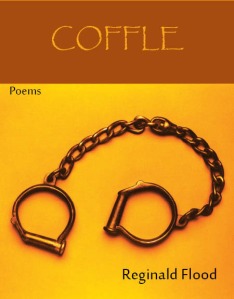 “Reginald Flood’s Coffle is an effusive down-home symphony that surrounds the reader with a warmly familiar, addicting music–you’ll find yourself ‘amen-ing’ out loud while reading these deftly-rendered tributes to the bone, breath and bodaciousness of colored folk.”

I am not going to talk about Hester tonight.

Ropes from wall cutting into wrist flesh with each strike

on her bare back.  Not going to talk about that slave breaker

Covey either, I was just tired of being beat because

that damn ox wanted new grass. This freedom is fog and freezing.

Two already have asked if I will sing tonight.

They look closely at me when they inquire, up and down

but never eye to eye.  I will start with the bread.

They always like that.  That tale about trading bread chunks for a vowel

or consonant with the poor white boys helps relieve their shock

when this voice fills the room.  This group will want to hear

about my mother.  I am cold here without the smell

of a real sea.  There is nothing there I miss, nothing

in a mist that warmed that scaffold into a Baltimore noon

and try hard not to remember what those ships were for.

Reginald Flood is a native of south central Los Angeles who now lives in a small town in southeastern Connecticut with his family. He has received a Walker Fellowship from the Provincetown Fine Arts Center and was the recipient of the 2010 Editor’s Prize from Tidal Basin Review. His poems have appeared or are forthcoming in The Ringing Ear: Black Poets Lean South, Cave Canem X Anniversary Collection, Massachusetts Review, African American Review, Mythium and Hampton-Sydney Review. He is a Cave Canem fellow and teaches composition, African American literature and creative writing in the English department at Eastern Connecticut State University. Coffle is his first full collection.